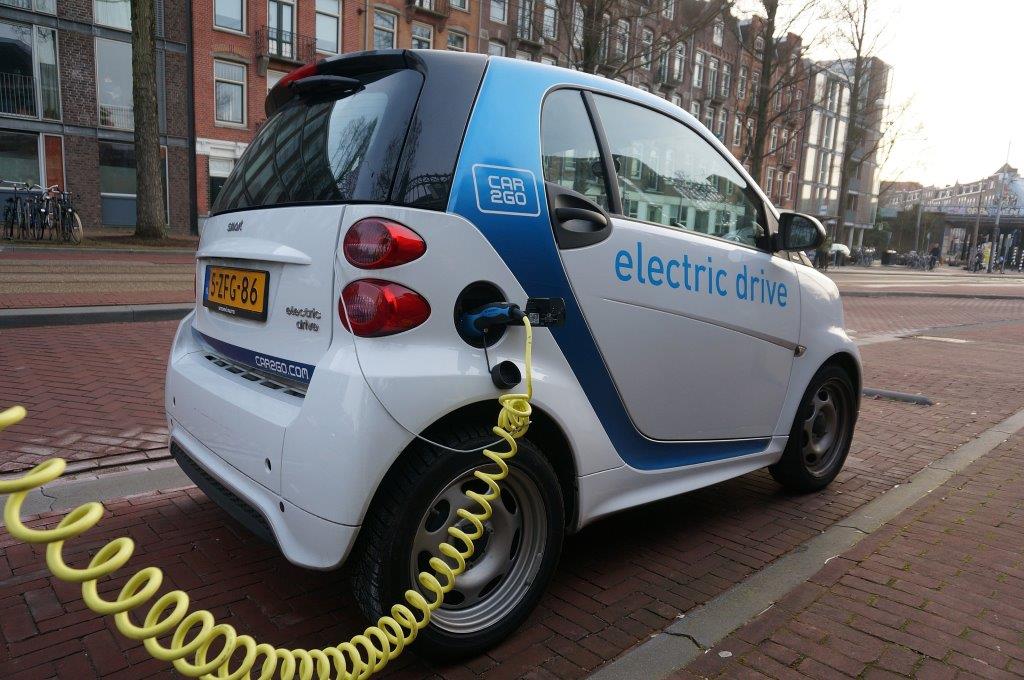 The average car in the UK produces over 2 tonnes of CO2 per annum and as the Scottish Government has set a goal to reduce carbon emission by 50% by 2025 and by 80% by 2050, there is an urgent push to replace petrol and diesel cars and trucks with electric or hydrogen ones (zero emissions). In addition exhaust emissions also included carbon monoxide, nitrogen oxides and particulate sooty matter, which affects public health. During 2013, it was estimated that air pollution, mainly from car tailpipes in cities, caused around 53000 and 5000 premature deaths in the US and UK alone, and probably a lot more in big cities like Bejing, Mumbai and Jarkarta.

The first vehicle powered by electricity emerged with the development of the rechargeable lead-acid battery in 1859. They became popular in the early 1900’s especially in the USA where 38% of vehicles were electric in 1912. However the high costs, low top speed and limited range compared to the internal combustion (IC) engine led to the decline of the electrically driven cars and the rise of IC powered cars. Other electrically driven vehicles survived in the form of train engines, trolley buses, trams and milk floats. During the 60’s and 70’s newer electrically powered cars were developed, but were not mainstream. The moon buggies of NASA’s Apollo Mission were battery powered, as are the Mars Rover vehicles.

The Energy Crisis during the 70’s and 80’s led to renewed interest in electric cars. With the general acceptance of the link between atmospheric CO2 levels and global warming, and following the Earth Summit in Rio during 1992, the California’s Air Resources Board (CARB) began a push toward a zero emissions goal which stimulated the development of concept electric cars like the Chrysler TEVan and the Toyota RAV4 EV by car makers who, unfortunately, continued to produce IC powered cars, and failed to promote their electric vehicles (EV’s). Most EV’s, however, were expensive and had a low range so were dubbed Neighbourhood Electric Vehicles (NEV’s). In 2008 Tesla produced the Roadster, the first e-car to use powerful lithium-ion batteries, giving it an extended range of 200 miles (Elon Musk’s own red Tesla Roadster was also the first car in space as a payload test for Space X). This was a catalyst for other car firms to manufacture ecars such as the Mitsubishi i-MiEV, the Peugeot iOn and Citroen C-Zero. Ecar in St Andrews now have a fleet of 10 Renault Zoe’s which have a range of 90 miles.

The Nissan Leaf was first produced in 2010 and was the first mass produced modern all electric car by a major car producer (250 000 sold globally by 2016). By 2017, Tesla S had sold 200 000 cars to rank it 8th among global car makers. Last year in Norway the market share of EV’s was 45%, with one in every ten cars a plug-in EV. In the UK it has been estimated that every 1 in 12 cars will be electric by 2030. The reasons for this success are largely due to the increased range, zero emissions/no road tax, cheaper running and service costs and pricing of third generation ecars. Previously costly to produce, the price of an ecar is now about the same as a standard IC vehicle due to the dramatic drop in EV battery prices over the last 5 years due to improvements in battery chemistry and economies of scale. In terms of running costs, ecars are now four to five times cheaper to run than an IC car. The inventor/entrepreneur James Dyson has seen the potential of this market and has ploughed £2.5 bn into his ecar venture. In 2015 he acquired the battery firm Sakti3, a solid state battery company, to power his products. Solid state batteries (solid electrodes and solid electrolytes) are smaller, lighter, non-flammable, cheaper, safer and charge faster than a lithium-ion equivalent. Current Li-ion batteries also produce heat which has to be dissipated, so his ecars would not need the cooling components and would thus be lighter and yield a greater range, while being cheaper and safer. Batteries can also removable (the Renault Fluence ZE also tried this), so there is no recharging time, but fast charge batteries have also been developed which charge in 30 minutes. Toyota have also announced that they will have a solid state ecar by 2020. Transport for London (TfL) is poised to spend £18m to upgrade its grid system for electric cars and taxis (the new black cabs, the TX5’s, are battery powered) to reduce city air pollution.

The emergence of hybrids and ecars has now led to another problem, a drain on the National Grid and less fuel duty for the Treasury (the Government earned £27.6 bn from fuel duty in 2015/2016). However, parked and plugged in ecars could also act as a power reservoir during peak demand and, in return, get free parking and get paid up to £2000 p.a. One thing is for sure, the combination of better battery chemistry/technology, smart charging systems, grid management, zero road tax; with lower running costs, services and car prices are make ecars less elite and more competitive and affordable, which is why all major car producers are expanding their ecar ranges and pledging to scrap making IC motors by 2030. Even VW, which has steadfastly refused to budge on the IC engine, after their fudged emission scandal, recently announced, after Green lobbying, that they will phase out all its IC engines by 2040, twenty years too late, but a step in the right direction. Not only big companies, but also countries are finally getting the message; France is to ban the sale of petrol and diesel cars by 2040, while the Netherlands are hoping to do the same by 2025.

We can only hope that, with a progressive shift from IC cars to ecars and etrucks (Tesla have developed an electric Semi truck), demand for oil will decrease and, with it signal a seismic shift away from a polluting carbon/oil-based economy to a more sustainable carbon-free one, which could include a hydrogen economy. Hydrogen vehicles can burn hydrogen cleanly in an IC engine, or via fuel cells which generate electricity to drive an electric motor, but that is another story!!