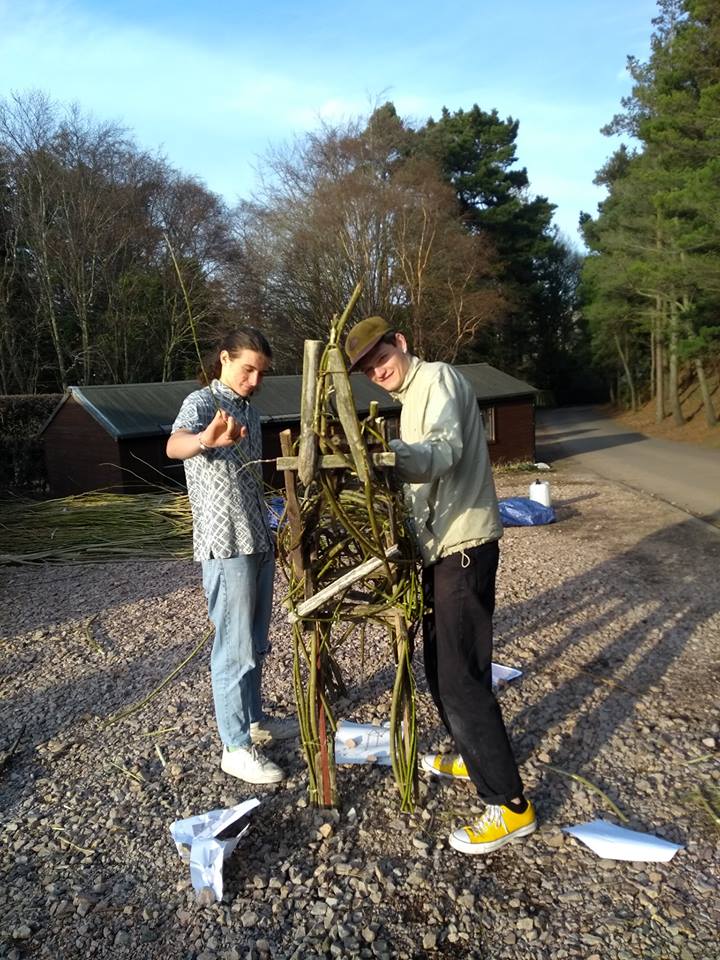 With the official support of Sustrans this project was given the green light and our plan was kicked into action. The idea, to create willow installations of deer, people and bicycles, scattering them around the shelter belt at the start of the St Andrews to Guardbridge cycle path.

First things first, we set off to Angus – including Carnoustie, Brechin and Arbroath – over two separate weekdays in early February to harvest 31 bundles of willow. We linked up with Fred Conacher, a forester with Angus Council, to manage this task. For early February the weather was forgiving, almost too kind to us, as we were blessed with two days of sunshine. Having said that, sporadic patches of snow covered Brechin. But with 3 hours of continual harvesting we survived just fine.

The harvesting wasn’t just a necessity, it was educational as well. We harvested a particular species of willow called Salix Viminalis, which we learnt has rods that grow about 1-2 meters per year. Cutting back the willow to bald coppice stools can expose most willow species to disease and dieback, however Salix Viminalis is one such type that is great for commercial production as it is highly resistant.

Back in St Andrews

By the next weekend we headed back out to Angus to pick up all 31 bundles. The roundtrip took us about four and a half hours, made longer by how heavy bundles of willow are! Once back in town the sculpting sessions were immediately underway. Bryndis, our lead artist on the project, began constructing frames for the deer and a few groups came out to join in the weaving fun. The frames were all constructed with dismantled pallet wood and old fence posts to keep to the theme of biodegradable materials.

So far we have had a dozen people come along and churn out roughly 20 volunteer hours. As a result, two of our deer is coming along really nicely and has already been named Rodan!

If you would like to be a part of the art, get in touch! Weaving sessions will be running just about every weekday from 12-3pm.

Check out some of the photos of the work so far…