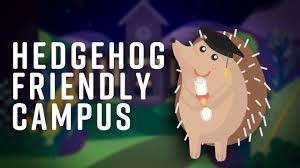 Hedgehogs are one of Britain’s most iconic and popular mammals, but sadly they are experiencing significant population decline, with recent studies suggesting by up to 50% since the year 2000. As of July 2020, hedgehogs are officially listed as ‘Vulnerable to Extinction’ on Britain’s IUCN Red List. There are many reasons for this drastic reduction in numbers; environmental poisons, roads, litter, drowning and lack of food, water and connected habitat. Mostly, these threats are anthropogenic.

As a way to support our local hedgehog population, St Andrews University has joined the Hedgehog Friendly Campus Accreditation Scheme. The Hedgehog Friendly Campus scheme recognises the impact that Universities can have on hedgehog populations due to the large expanses of land they occupy and the pressure they can exert on the natural environment, it also recognises the motivation amongst students to tackle biodiversity issues. The University’s Hedgehog Friendly Campus Team was officially formed in November 2020, with members from the University’s Estates department, St Andrews Botanic Garden, the Environment team, Transition, as well as students. The group are aiming to achieve Bronze level accreditation for the University over the next 12 months, while also engaging in campaign initiatives amongst the wider St Andrews population.

If you are interested in finding out more about the initiative or would like to join the team, please get in touch with Aisling Wallace, amw32@st-andrews.ac.uk