Four minute showers for the future! 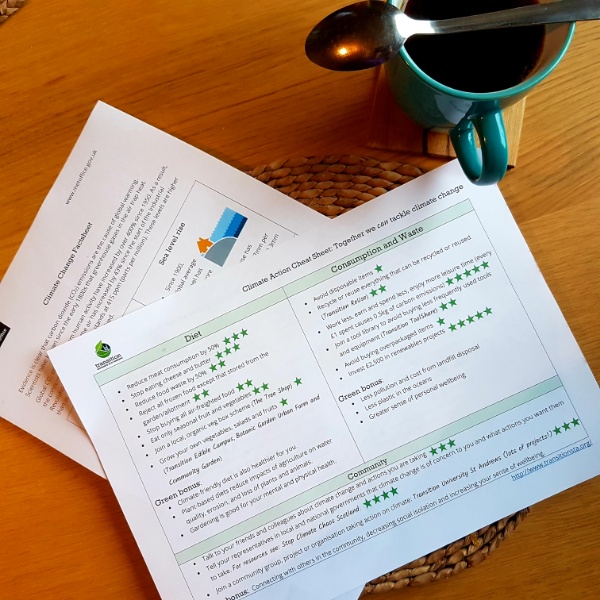 During the Climate Conversation that I attended, one of the topics discussed was about what one, as an individual, can do to lower their personal carbon footprint These included things such as buying more local food or switching your home heat to a renewable energy source. As a group we talked about which ideas we favored and which of those we disliked the most. One of the ideas that was almost unanimously the least favorite was limiting your shower to four minutes. After the group nodded heads in agreement that a four minute shower sounded pretty difficult, one of the participants made a really interesting point. She noted that although a four minute shower would indeed be hard, it was something that each of us could tangibly start doing the next day to decrease our carbon footprint.

There we were, a group of about eight people, discussing how we can prevent climate change, deciding not to do something that would lower our personal footprint. Weird, right?

Then it hit me… I’m someone who claims to care about the environment. And I’m certainly someone who wants to do everything I can to lower my carbon footprint and prevent climate change. In fact, I’m even extremely aware of many things I can do to lower my carbon footprint. Yet, I don’t do them. Why? I’ve decided it all comes down to convenience. I’m an extremely busy person (aren’t we all), so, hypothetically, I don’t have time for “inconvenience”. Decreasing my carbon footprint simply would take too much time, change my schedule too much, or uproot my life in too big of ways. Or would it?

I’ve decided to test the hypothesis that decreasing your carbon footprint would impact your life in negative ways. I’m assuming I’m not the only one out there who has been hesitant to make carbon-reducing changes as a result of convenience (hence, an entire group not wanting to take shorter showers). So, if you’ve been on the fence about making some carbon-reducing lifestyle changes because you aren’t sure how it’ll affect your life, this experiment is for you.

For the month of November I’m going to be making four changes to my everyday life that will decrease my total carbon consumption – I took the ideas from the Climate Conversation Climate Action Cheat Sheet – you can download it here (PDF). Along the way, I will be documenting how it has affected my life, both the good and the bad. The four changes are:

Limiting my shower to four minutes
That’s right! I’m going for the one thing the group thought sounded dreadful. I’m really hoping it’s not as difficult as it seems. Wish me luck on this one!

No consumption of cheese or butter
My husband and I are vegetarians, but we certainly love our dairy. The hardest part of this for me will be avoiding pastries that were made with butter. But at least (hopefully) that means I’ll be choosing healthier options?!

Sticking to the speed limit while driving
It might not be super straightforward to all as to why this affects your carbon footprint, so I’ll briefly explain. Driving slower uses petrol more efficiently, leading to a higher miles per gallon of petrol value. So in the end that’s less fuel used, less fuel combusted, and less CO2 emitted.

Turning the thermostat down by one degree
I’m not too worried about this one. For whatever reason, I’m cold all the time, so I’m really used to wearing lots of layers. I’ll just add another whenever I’m at home! For reference, our thermostat will be turned down from 17 to 16 degrees C.

I’ve tried to choose options that, to me personally, varied in degree of difficulty. Before starting, I think that taking four minute showers will be the most difficult for me and turning the thermostat down by one degree will be the easiest. I’m excited to see how that changes at the end of the month! If you’re feeling inspired, do a November challenge of your own to see how you can decrease your carbon footprint. Be sure to tell your friends and family about it too because the more the merrier!…and the better off our planet.